I am a long time resident of San Francisco who has long been dismayed by Newsom's neoliberal, anti-homeless, pro-authoritarian, gentrifying, hypocritical policies.

Newsom, a poster boy for elite interests if there ever was one, has vetoed a bill which would have made it easier for workers to organize.

The Sacramento Bee has the story.

California farm workers are heading to a winery owned by the company Gov. Gavin Newsom founded as they continue to protest his veto of a bill that would have made it easier to vote in union elections.

The planned stop at PlumpJack Winery vineyard on Saturday follows a United Farm Workers march on Thursday to the pricey French Laundry restaurant in Napa County, where Newsom celebrated a lobbyist’s birthday in November as he was asking other Californians to avoid indoor gatherings because of the coronavirus pandemic.

Elizabeth Strater, director of strategic campaigns for The United Farm Workers, said about two dozen marchers participated in the French Laundry demonstration. The union expects more people to join its planned march from the French Laundry to the PlumpJack vineyard.

Strater said organizers felt “a lot of anger and a huge sense of betrayal” after learning the governor vetoed the bill. During a contentious recall election that threatened to oust Newsom from office, the labor union backed the first-term governor.

Here are some updates on the Gavin Newsom recall, in no particular order.

👺 The masterful and superbly executed Patch Guide to the recall is here.

👺 Conservative Kevin Kiley, a strong supporter of those disastrous charter schools, is running for governor, should Newsom be recalled. Here is an interview with him. here are his talking points (short on specifics!).

To that end, Kiley is sponsoring a 2022 ballot initiative to create a school voucher system, allowing public school students to spend their allotment of state education funding on the school of their choice.

👺 MSN covers the recall with emphasis on Larry Elder, the right wing, Black talk show host and lawyer. Here is a poll from UC Berkeley that the commentary links to.

👺 Here is an informative article from the Desert Sun about Newsom’s war chest to fight the recall and who contributed.

“They include California’s largest teachers union and its most vocal charter school advocates; nurses and the hospitals they sometimes clash with; real estate agents, developers, building trades unions and corporate landlords who have differing views on the housing crisis; defense contractors at Lockheed Martin; abortion-rights advocates; new car dealers; and the financier-turned-liberal-megadonor George Soros. All have found common cause in keeping Newsom in his job.”

“A new CalMatters analysis of the donors to the main anti-recall committee found that organized labor threw Newsom the largest financial lifeline — roughly 45% of the total, including $1.8 million from the teachers union and $1.75 million from the prison guards this week.”

👺 SFGATE relates that John Cox had a wild ride at the first debate. Watch the debate here.

Cox opened his evening by raising some eyebrows with remarks on COVID-19 vaccines when asked about what he would do to increase vaccinations in the state.

“There’s a lot of people that have had COVID and have antibodies,” Cox said. “They don’t need the vaccine. They shouldn’t get the vaccine.”

At the debate he was served a subpoena for failing to pay $100,999 to an advertising agency. How can anyone possibly support this individual?

👺 Business Insider relates that Kevin Paffrath could become California’s youngest governor to date. Twenty nine years old and filled with his own entitlement, he has challenged Newsom to a debate and volunteered to donate a millon dollars to “charity” if Newsom agrees.

“The YouTuber is a real estate investor out of Ventura, California. His channel has nearly 1.7 million followers and focuses on daily commentary on stocks, housing, and stimulus. The channel has turned Paffrath into a multi-millionaire. In the past year alone, he has earned nearly $10 million on YouTube, according to CNBC.”

👺 PolitiFact demystifies the misinformation regarding the Newsom recall.

“The recall ballot will have two parts:

“Voters will choose “Yes” or “No” on Question 1. A “Yes” vote means you want Newsom to be recalled. A “No” vote means you would like Newsom to remain governor. If more than 50% choose to recall Newsom, the candidate who wins the most votes will replace him.”

👺 Angelyne has the nihilist vote down pat! Read about her remarkable “journey” here. But this fake won’t be telling you about herself in the article. Because…..

An Ashkenazic Jew (so a woman of color), an entrepreneur and someone who is a totem representing the vulgar taste of the Los Angelenos, there is much for the nihilist version, or someone who chooses to embrace a dystopian government, to like here.

“Everyone deserves safe, clean housing as a basic social right. Instead of criminalizing homelessness and wasting money forcibly moving them around and incarcerating them, we need a housing first approach to restore stability and privacy to their lives. There are roughly five vacant homes in the state for every homeless person, the wealth is there to guarantee everyone decent housing and social services but all those resources are currently being directed to the private profits of giant corporations and the state’s billionaires.

What should California do to build up its middle class?

In order to elevate the state’s working class, we must overhaul the education system. K-12 education varies wildly throughout the state and is preposterously tied to local property taxes. Universal access to a high quality public education is essential to democracy and a basic social right. Fully funding public schools so that class sizes statewide are 18 students or less and all schools have support staff like nurses, librarians, counselors, art and music programs will pave the way for economic prosperity. At the university level we must commit to free higher education at the community college, CSU and UC levels.

Would you propose any new policies to address climate change?

Climate change is fundamentally driven by capitalism and can only be solved as part of an internationally planned economy that puts the well being of humanity above private profit. In order for California to play its part in addressing climate change we must first end the cartel utility system dominated by PG&E and Southern California Edison and integrate the state’s power electrical system into a single public utility that can rationally apportion resources across the state. Second the state must invest heavily in public transit and basic infrastructure projects by, for example, driving out corruption and finishing the delayed and over budget high speed rail project which provide the foundation for large-scale emissions reductions.”

👺 Gavin Newsom’s campaign failed to get him listed as a Democrat on the recall campaign, according to the San Francisco Chronicle.

“The Secretary of State’s Office has a ministerial duty to accept timely filed documents. Acceptance of filings beyond a deadline requires judicial resolution.”

👺 The Washington Post opines that Gavin Newsom is far from safe from recall.

The anti-Newsom movement includes many small-business owners hurt badly during state-ordered shutdowns. An estimated 3 in 10 restaurants operating before the pandemic have closed permanently, and many who suffered economically are expected to cast ballots. Many of the less motivated people are TBD. “No one is paying attention,” says progressive political consultant Jennifer Rindahl, who expects voters will check in after the mail-in ballot from the Board of Elections arrives in their mailbox. It’s summer after all.”

👺 The Fresno Bee evaluates how Newsom has performed in terms of campaign promises versus reality.

“Despite Newsom’s actions, homelessness is still rampant. Tracking of homelessness has stalled during the pandemic, but the most recent numbers from January 2020 found California’s homeless population grew by about 10,000 people, bringing the total population to more than 161,000.

Status: In progress, but slow-going“

Newspaper has a bogus list of reasons to recall Gavin Newsom

“For more information on this were the cars” the La Mesa Courier (otherwise known as Lame sacourier” Laura Crivello writes = Do you not read what you write before you publish?

Gavin Newsom runs PG&E. Who knew?
This is a Republican-backed campaign. They distort that fact!

“High speed” rail is a fraud because only wealthy people will be able to afford it, but most of the other reasons are bogus if not purposefully misrepresented!

Conservative San Francisco former Supervisor Tony Hall wrote a scathing indictment of Newsom, which called for a yes vote while not mentioning the lack of competent replacements running.

This writer offers the most amazingly pinhead views. Prisoners were released from overcrowded prisons because imprisonment should not be a death sentence!

Forbes writes: “The economic devastation caused in part by his lockdowns has scarred the state. Between 2019 and 2020, California saw a 6.8% increase in homelessness, according to a report released by the U.S. Department of Housing and Urban Development. At the time of the study, more than half of the homeless population of the United States lived in California.”

“Newsom’s policies put people on the street without alleviating the impact of the pandemic. And judging by his own behavior, his precautions were purely performative.”

Between 2019 and 2020, there was no pandemic, and Newsom can not be responsible for this: corporate capitalism is!

Will Harris run against Newsom for president in 2024?

And Harris’s record is clear! 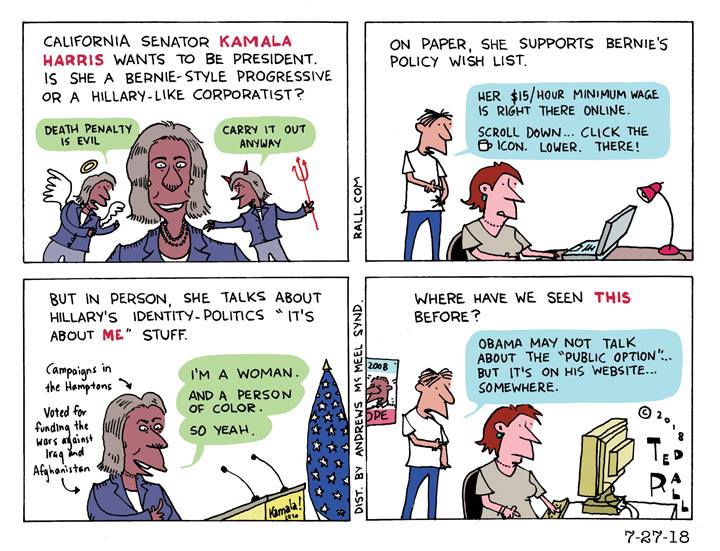 This is truly disgusting!

The other two points will likely draw strong pushback from community activists and certain city leaders. One calls for requiring homeless individuals to receive addiction or mental health treatment before housing is provided, and the other calls for increased law enforcement crackdowns.

Then there is the implied comparison with the the pile of garbage:

Cox will not be joined by the bear again, but rather an “an 8-foot ball of garbage.” 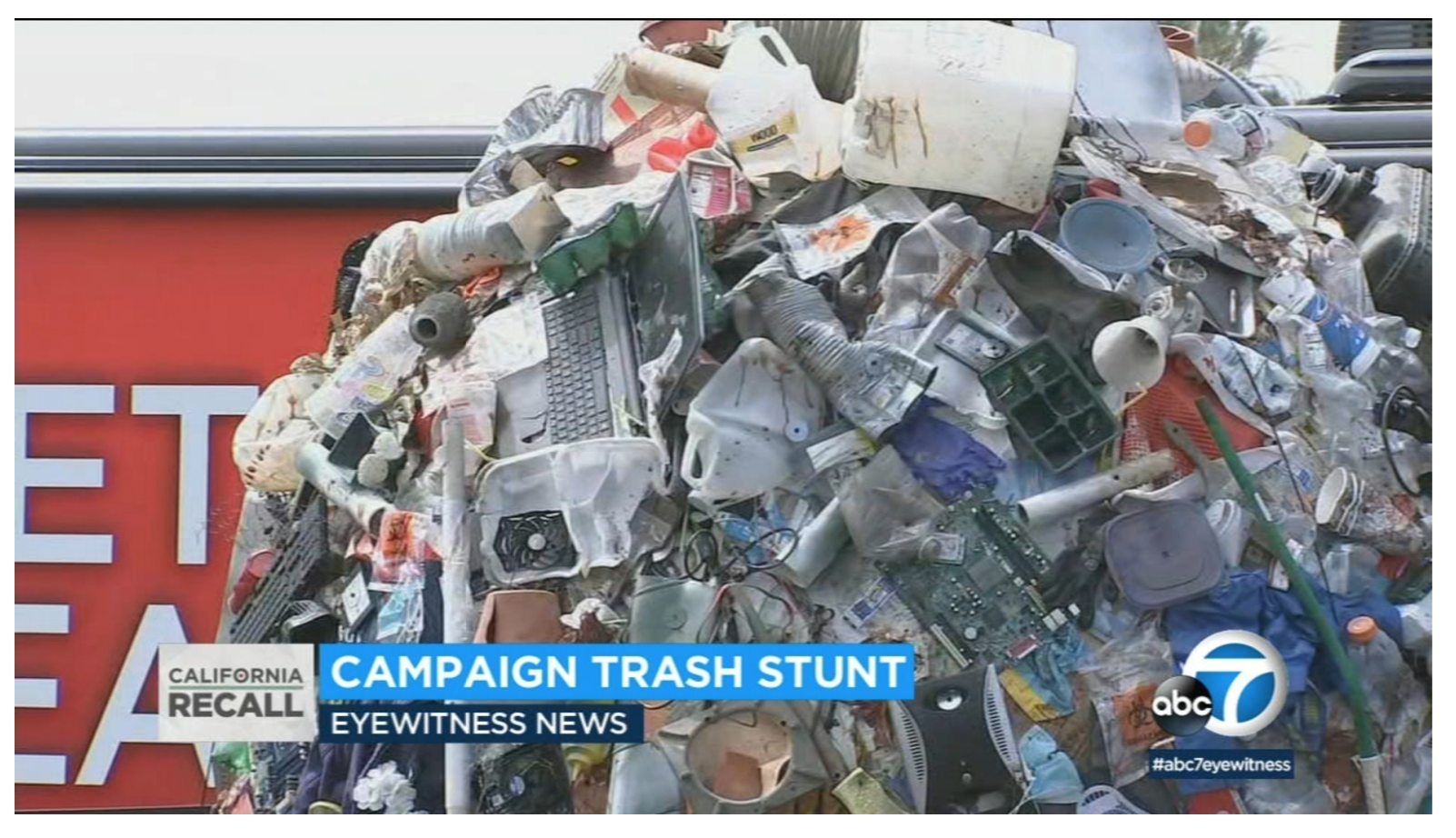 And now another documentary is on the way.

CBS8 offers you the chance to play Gavin Newsom bingo! Don’t miss out!

Down in Santee Countee, a controversy rages with conservative San Diego Mayor Minto taking on a liberal politician who is opposing the recall by calling supporters:

Of course, many people have good reason to oppose Newsom’s policies. As with most other Democratic Party politicians, he serves the wealthy. Indeed, Newsom was selected and groomed by the Getty family. He is the cousin of Nancy Pelosi. Many of his policies have been far from liberal.

“When asked how soon the dining rooms would be reopened the Napa County Health Department, replied recently, “…we are on track to enter the State’s less restrictive red tier, which means congregate dining facilities would be able to serve indoors again at 25% capacity. We are hopeful that a move to the red tier will occur in the coming weeks but the State will need to approve it based on current metrics.”

“Governor: Why countless “weeks” more? Why 25% capacity? We are talking about a dining room for an entirely vaccinated group of people who live in the same building and share the same air. Are you unable to immediately adapt to current conditions and address this critically urgent need?”

It is unclear who would replace Newsom, if he is impeached. The Republicans have funded the recall effort, so that may deter Democratic Party opponents to run. Last time around we had a top-tier Democrat choice of three nonentities. Newsom won, but would Villagraigosa or Chiang have been a better choice?

John Cox would definitely be worse than Newsom.