This is excellent journalism by the LA Times!  The Chronicle would never touch this. They are the Pravda for the elites!

Significant here are the facts that:

a) Some of the families listed here also control the art museums (which they have treated as their personal fiefdoms).

b) The Pritzkers are also tied to Rahm Emmanuel and other corrupt Chicago elites. Astonishingly, Penny Pritzker was Obama’s Secretary of Commerce.

c) The Shultzes wrote a letter of support for new conservative neoliberal San Francisco Mayor London Breed. Some 60,000 of these were sent out to Republican voters.

d) Mark and Suzy Tomkins Buell are notorious. Buell, a developer, tried to bulldoze all of Mt. San Bruno. Suzy, who is banned from Esprit headquarters (a company she founded with her late ex-husband, who went on to found Patagonia) is HRC’s BFF and a solid supporter of corporate “lean in” “feminism.”

They have worked to privatize public parks in Marin and San Francisco through the use of “nonprofits.” 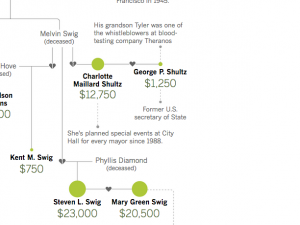